One of the most important endeavors I’ve worked on recently is a FINANCIAL INCLUSION MODEL, otherwise known as FIM. This model goes far beyond current technology to define the components of a seamless approach to managing the complexities of a new Acquiring Model.

By elaborating a solution from the Economic and Financial System standpoint, the FIM contends it lays the foundation for common Payments Standard to build all future Mobile Ecosystems and sets the path to expanding the current financial payments schemes without losing its purpose.

The FIM’s purpose is to achieve TOTAL FINANCIAL INCLUSION. There is only one absolute prerequisite. All users must have access to, at least, a low bred feature phone. Once they have this: (i) They will be able to open FI account on the fly, straight from their phone; (ii) They will be able to load their e-Money Purse at thousands of endpoints (agents), and they will be able to save and borrow directly from their phone… Furthermore, dynamic scoring will determine “marketing offers sizes” on the spot and people will have access to Savings and Credit a few days after starting their account.

The FIM allows anyone with a feature phone (smart phones included) to initiate a (mobile) Bank Account directly from their device in an unattended transaction. The account resides in the e-Money Management System. An Agent Network features the Bridge-To-Cash Component which allows users to de-materialize cash by (i) Either cashing in at agent station, or (ii) receiving a Transfer from another e-Money Account Bearer. The Bridge-To-Float component seamless integrates the current banking and Payment system into the e-Money Ecosystem allowing banked and un-banked population to execute transactions in tightly-knotted ecosystem.

The FIM will show how today payment instruments, including cards and cash, will become obsolete in the face of the evolving solution presented in the model. 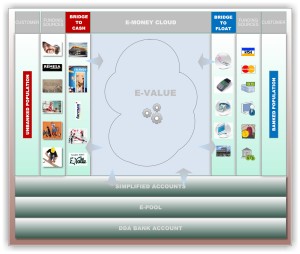 Read from right to left and top to Bottom:

The FIM caters to a clear-cut co-existence between banking today and banking tomorrow. When these components are brought together in smooth operation, today’s payment instruments become only sources of funds to an interconnected world wherein the unbanked and the banked population could operate with total transparency and in a conjoined environment.

The onus I’m tackling with is contriving a sheer “Economic System” that will address all the loopholes in today’s Mobile Payment implementations. By focusing on the available technology or “Mobile” issues, most of today’s solutions only address a component in the new payments value chain. They either solve the “Correspondent Banking” issue, the “Mobile” or the “Multichannel” issues, but they lack the contrivance of re-thinking the payments value chain, while smoothly integrating the new and old payment instruments. We shall look into this matter, not from a “Mobile Issues” standpoint, but from a new Financial Ecosystem viewpoint which positions the Business of Banking and Payments for a full overhaul. It all comes down to re-thinking the Banking Systems, along with the International Payment and Acquiring Models to build a fine-tuned new Payment and Financial Ecosystem wherein the Current UNBANKED population ends up with a Payment infrastructure truly similar to the well-known RTGS we all have come to trust to reinforce our domestic financial payments.

My hope is that this initiative will pave the road for a smooth “Inclusion” of the BoP and unbanked or under-banked population. The model contends it could foster whole countries “Financial Inclusion” if solutions are approached with its overarching fundamentals. Current initiatives are missing the point by focusing on fragmented-components. The TRUTH is, we’re confronted with a challenging new Economic Environment which, at the very least, demands a new “Acquiring Model”, a matching Payment System and a seamless Financial Inclusion Focus. By delving into the more abstract issues underlying the new Payments Ecosystem, the FIM comes close to proposing a complete Financial Systems redress without destroying it altogether.

Note:  This is a first publication in a series whereinto I will thoroughly describe the components of a Full-Fledged Financial Inclusion Initiative.  This initiative puts technology on the back burner and deals with setting up the “Economic Finality” behind payments and enacting a new kind of “Money” to fully compete with “Cash” at the Bottom of the Pyramid.   To fully fathom the model, read chapters starting at “Chapter I”.